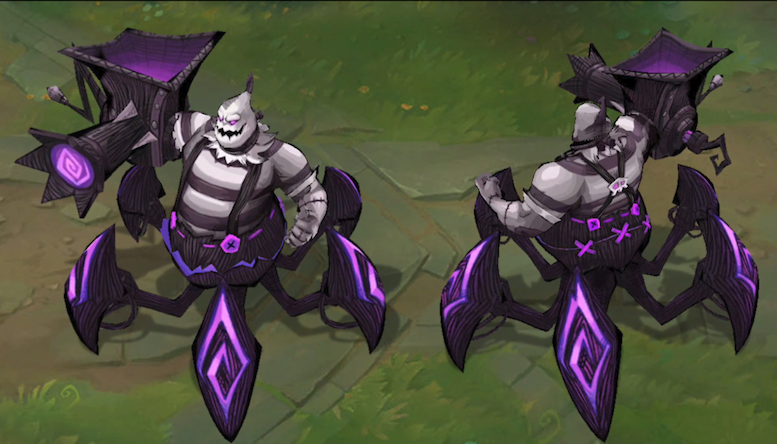 Riot Games launched a poll earlier this year for players to decide which champions should receive a VGU update. With this poll, Riot also started another one on old skin line updates, featuring Gothic, Infernal, and Arclight skin lines. In the end, the Gothic skin line got the most votes from the community, allowing Riot to get started on the update. The skin line will be renamed Fright Night, featuring Annie, as well as five other much-loved champions.

Interested in that one skin but never got around to getting it? Well, why not visit chicksgold.com and head to buy LoL Smurf accounts, these ready-to-play League accounts are stacked with RP and all the skins you could possibly desire, plus, they also feature cheap, premium accounts with high MMR for ranked games.

The then-new universe skin series Goth debuted in 2009, with the introduction of Goth Annie. This was Annie’s first skin, and it portrayed her as a mischievous goth kid. The skin was accepted incredibly well by the community, allowing for a new Goth skin to be added for Amumu.

This time around, Amumu was depicted as Emumu, an emo persona that nicely complements the Goth skin line. Much like the Goth Annie, Emumu received only positive feedback, which led to the release of Gothic Orianna, the final skin of the series. At the time, these skins were a refreshing addition to the game, but over time, they got trampled by new releases.

A video detailing Riot’s plans for the 2023 preseason was recently published. They showcased a number of updates and enhancements, such as the reimagined Gothic skins, now called Fright Night skins. This skin line will feature never-before-seen visual graphics and six champions that suit the horror theme the best. Those are:

With Goth Annie skin, Annie is a logical choice for the skin line update. She is a cursed child with a hidden secret. A perfect horror movie plot.

Draven is a narcissistic, cold-blooded axe wielder who would want nothing more than his name to echo throughout eternity. A perfect serial killer in the making.

Trundle is a troll with a creepy gait, wielding a huge club ready to clobber some foes. This new skin set works out perfectly for him. Also, Trundle received his last skin back in 2020.

Renata is also a good choice for the Fright Night theme, with her gasses ready to corrupt minds and wreak havoc.

As one of the most terrifying champions in the game, Urgot stands out thanks to its mechanical legs and mean nature. He looks like a failed experiment leading to a horror story.

Nautilus on its own is very mysterious and scary, so this skin theme will complement his lore very well. Can’t wait to see him bludgeon champions with his anchor.

When will Fright Night go live? Is there going to be a separate event?

The skins have been confirmed by Riot Games, with their reveal on the 8th of September, but the official release date will probably be revealed with the next patch. The Night Fright skin line will most likely make its appearance on the 23rd of September when the new patch 12.18 is scheduled for release.

No special event is planned for the Fright Night skin line at this time. LoL Worlds is just around the corner, therefore, all efforts are put into balancing the game for pro play. However, there will be a Worlds event, similar to the 2022 Mid-Season Invitational. Keep your eyes peeled for any news on getting free tokens for spectating championship games, that may be a thing too!

How much will the new skins cost? Is there going to be a Legendary skin?

Guided by previous experiences, we can suggest that the skins will cost 1350 RP, as no official information was released. They might include a Legendary skin as well, but don’t get your hopes up as the Star Guardian event brought many of those to the game.

How to Play Games on Android TV Box With Keyboard